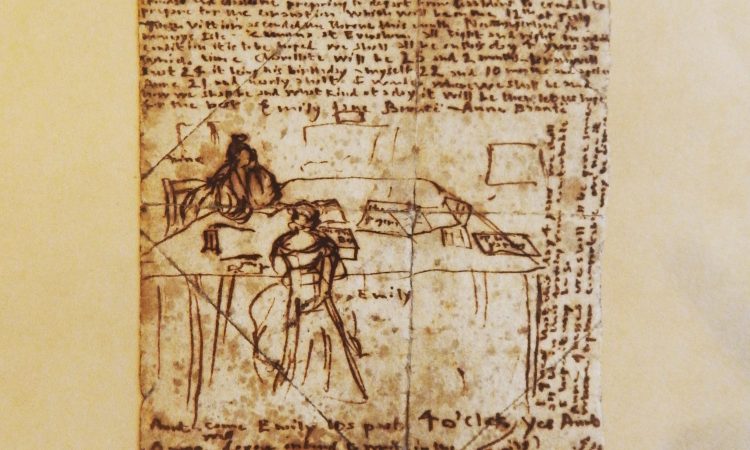 In 1847, when Emily Brontë published Wuthering Heights under the male pseudonym Ellis Bell, reviewers didn’t quite know what to make of it. Many were dismissive and a handful recognized it as a work of genius, but all were baffled.

“This is a strange book,” one succinctly remarked.[1] Charlotte Brontë tossed a further wrench in the literary market machine when she revealed herself and her sisters as women three years later. Emily, by the second printing of her novel in 1850, had died of tuberculosis, and Wuthering Heights has since been widely marketed as a romance novel. Close friend to Charlotte, Ellen Nussey’s account of Emily as a “law unto herself, and a heroine in keeping to her law,” however, counters popular culture’s characterization of the middle sister as a waif-like mystic whose work is regularly figured as a sultry romance for mainstream audiences. [2] Instead, the real Emily Brontë, eccentric and masculine, offered a radical indictment of the socio-political hegemony she and her contemporaries labored through in her masterpiece.

It is very easy to think of all nineteenth-century women writers at their little solitary desks. It is perhaps less easy, but no less accurate, to envision Emily Brontë writing a radical novel in her cramped penmanship. The privileged attention to its romance overlooks Brontë’s depiction of the strangulating effect on Wuthering Heights’s Catherine Earnshaw as she transforms from a brash child to a woman enmeshed within the patriarchy’s physical and mental violence, and Heathcliff’s descent into his position of oppressor. Brontë’s novel, in our popular imagination, simplifies into a digestible, non-threatening story of doomed lovers. In the village of Haworth, Wuthering Heights tells a different story.

Over the United Kingdom’s hottest days on record last July, I extended my doctoral research and conference trip to visit the Brontës’ genius loci. From the Detroit Metro Airport to Heathrow to North London, the trip to the sisters’ home in Haworth is nearly labyrinthine. Seemingly insulated from the rest of society, the Brontë Parsonage Museum and its library, like the village it’s nestled against, is picturesque and a pleasure for any literary fan to peruse. But between their house and the landscape around their home—Brontë Country as it is now known—one finds the sisters raw and unromantic. The museum’s tour showcases their plain mode of living, neither rich nor destitute; the research library likewise provides insight into the sisters’ devotion to one another, but also their disagreements and literary and monetary struggles. Although little of Emily’s personal writing has survived, what has illustrates her “strong, imperious will” throughout her short life.[3]

The morning after my research in the library, I left my hotel early to hike to Top Withens, a ruin said to be the inspiration for Wuthering Heights’s eponymous farmhouse. I eclipsed the waterfall and stone bridge before coming up the steep valley to see a dot on the horizon. It was not the ruins of Top Withens, but the much larger tree beside it. It seemed impossibly far but at the end of a path crowded by ferns and heather, I felt even closer to Emily Brontë at Top Withens than I had in her bedroom. My ankles were thistle-scratched and I had more than enough sheep stool on my shoes to last a lifetime, but Catherine Earnshaw echoed in my head. Her desire to be “‘a girl again, half-savage and hardy, and free’” is an ode to Yorkshire’s remote moors and its black heath—and, mostly, the unbridled freedoms of a childhood in the green world.[4] I was sweaty and aching, and elated. I had a glimpse into the rough liberty Brontë cherished.

For all her isolation at that blustery point, however, Brontë was very much aware of the wider world. Brimming with criticisms of patriarchy, the class system, racism of an imperial nation, domestic abuse, and the hypocrisy of middle-class Christian morality, Wuthering Heights recognizes how hegemonic systems of power infiltrate every pocket of a nation. When he is adopted into the Earnshaw family, the orphan Heathcliff befriends the “wild, wick slip” Catherine, and the two enjoy a fierce childhood on the moors.[5] They unite against the racist and patriarchal forces of society that oppress them, embodied by Catherine’s elder brother. However, after the affluence of the neighboring family entices Catherine, she agrees to marry Edgar Linton as the lady of his estate. Heathcliff, overhearing of their engagement, runs away. His return three years later sets in motion a devastating betrayal of one another and themselves: in pursuit of the comforts of the very institutions that oppress them, Heathcliff and Catherine disrupt their solidarity until it destroys them.

Emily Brontë makes no excuses: it is clear they both choose to adhere to gender roles, to become vengeful capitalists, to abandon one another. The further entrenched each becomes in such institutions, the more they fracture until they lose each other and the childhood they long for. They can only return to their earthly paradise after Heathcliff acknowledges his perpetuation of the system that once victimized him and Catherine. When, in the last pages, Heathcliff reunites with Catherine as ghosts on the moors, they are finally liberated from society in death. Wuthering Heights asks us to recognize our own childhood selves before we too were tamed by society; it argues we must continuously strive toward childhood’s righteousness, despite the temporary comforts offered by the status quo.

I first picked up Wuthering Heights on a whim at the now-defunct Borders in my hometown mall. I was fourteen and couldn’t articulate its effect. I’ve spent half my life with Wuthering Heights now and it has since inextricably framed my own convictions.

We can’t insulate ourselves from society (nor should we) but we can take a lesson from Brontë. It’s time we forget the romance. Despite what one may glean from the many renditions of Wuthering Heights, Brontë doesn’t idealize Heathcliff and Catherine’s relationship as adults. Nor is Heathcliff the amorous hero film and book covers have made him. Instead, Brontë offers us a terrifying vision of the tormented monsters we become when we sacrifice our solidarity and throw in our lot with institutional oppression.

Marisa Mercurio is a PhD student at Michigan State University studying nineteenth century British literature. Her primary areas of research are: intersections of gender, sexuality, and empire; female detective fiction; and the Gothic. She has recently written for Sublime Horror, presented at the University of London on Clemence Housman’s novella The Were-wolf, and has an upcoming review for Natasha Pulley’s March 2020 neo-Victorian novel by Bloomsbury.