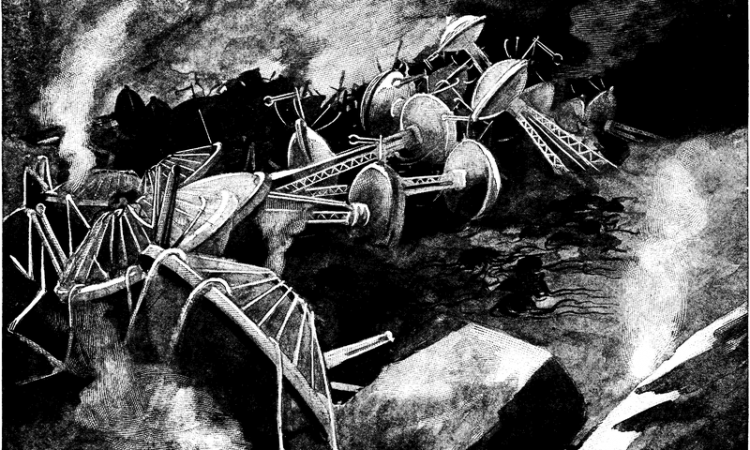 If you have ever read or heard of H. G. Wells’ The War of the Worlds (1898), then you will be familiar with its role in the literary world of science fiction fantasy and reality. With the recent launch of a new BBC three-part adaptation of Wells’ classic tale, there is no better time to discuss the novel in a new light, reimagine the role of Martians and provide new critical insight into the relationship between the human and the animal in late-nineteenth-century literature.

Many critics argue that further critical examination of early science fiction texts often seems unnecessary and self-evident. It can be argued, however, that there is room for further critical analysis that disrupts conventional boundaries between the different literary genres. With the introduction of new critical insights, theories and approaches, including posthumanism – a study of the relationship between humans, animals and machines in the age of digital technology – there is potential for new readings of the text.

The novel’s central theme is the arrival of Martians in London from Mars, setting up a major conflict between humans and animals and forcing the collapse of all social hierarchies as the main characters fight to survive the invasion. Humans are forced to work together to survive, regardless of social class, religion, gender or race, providing a gentle reminder for humanity to eliminate issues with discrimination and work together in unity with animals. The Martians have evolved as the superior race, which offers readers the opportunity to reflect on human evolution.

In Learning from Other Worlds: Estrangement, Cognition and the Politics of Science Fiction and Utopia (2000), Patrick Parrinder considers how “the representation of the alien marks a shift from more explicitly didactic works (utopia, social satire etc.) or more pleasurable forms of fiction” (Parrinder, p.128). The conflict occurs in real-world time and locations. London is the central target for invasion – chosen, as in other literary texts such as New Grub Street (1891) by George Gissing, due to its historical-cultural context. London has been the driving force behind the advancements in technology and has grown enormously to become a global city of immense importance, connecting the UK with Europe and the rest of the continent.

The narrator imagines for the first time “how an ironclad or a steam engine would seem to an intelligent lower animal” (Wells, 1898, p.81). It is possible here that H.G. Wells is making a comment about humanity. Although we assume that he is calling the Martians the “intelligent lower animal”, it could also be that he is in fact referring to humankind. Wells therefore establishes a dichotomy of race with the idea of superior and more advanced human-animal forms. He further comments on the “ruthless and utter destruction our own species has wrought, not only upon animals, such as the vanished bison and the dodo, but upon its own inferior races” (Wells, p.6) and that we must therefore be more empathetic towards other species that reflect an alternative reality.

The Martians lack some – but not all – human characteristics. In the text they “wore no clothing” and “different bodies according to their needs just as men wear suits of clothes and take a bicycle in a hurry or an umbrella in the wet” (Wells, p.212). Wells distinguishes their characteristics in comparison to that of a human to help provide a better understanding of how the Martians exist in a space that is alien to them. They are no lesser man than they are creature or animal, because they wear their different bodies just as men wear suits of clothes. Most importantly, the Martians do not discriminate between classes: they do not spare women, children or the clergy. They create a fictional space where “the fear and empire of man has passed away” (Wells, p.192) and all social hierarchies become irrelevant in their quest to connect with humankind and English culture.

The major takeaway for the narrator and the reader, I would argue, is compassion for animals: “Surely if we have learned nothing else, this war has taught us pity – pity for those witless souls that suffer our dominion” (Wells, p.172). The Martians are us. They stand as emblems of the Other. Their arrival on Earth is a warning to humans. A warning to convey the necessity for humans to establish foundational relationships with animals and other entities to survive; to foreshadow the events of the First World War, and warn against humanity’s misuse and manipulation of technologies, machinery and warfare that could destroy us all.

Roseanne Ganley (@RosGanley) is a first year PhD literature student at the University of Essex, where she studies the posthuman movement from the late nineteenth century to the early twentieth century. In her spare time she is a copywriter and travel enthusiast, often blogging about her European travels.

Parrinder, Patrick. (2000) Learning from Other Worlds: Estrangement, Cognition and the Politics of Science Fiction and Utopia, Liverpool: Liverpool University Press.