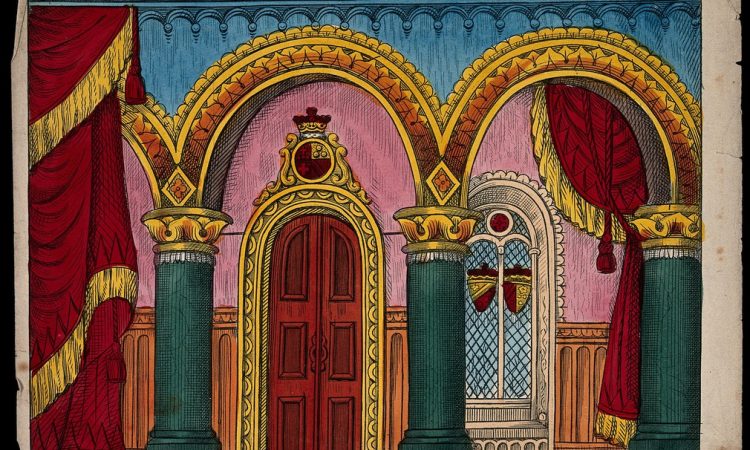 Toy theatre was a popular children’s entertainment from around 1811 (the date of the first preserved sheets) until the 1860s. More than just a model stage, publishers offered young practitioners a variety of scenery and character sheets, abridged play scripts, and small-scale special effects with which to perform juvenile dramas.[1] Publishers often based juvenile productions on popular plays staged in full-scale London theatres. Melodramas and pantomimes were usually favoured for miniature productions. In an interview with Henry Mayhew in 1850, one of the most prolific toy theatre publishers – William West – supposedly stated:

‘The Miller and his Men’ has sold better than any other play I ever published. I wore out a whole set of copper plates of that there. I must have sold at least five thousand of that play, all complete. It’s the last scene, with the grand explosion of the mill, as pleases the young uns, uncommon. [2]

Copies of this final scene can be seen here. Aside from the exciting and emotionally affecting content of melodrama, these genres offered practical benefits for toy theatre publishers. The settings were usually standard, and so were evoked by redeploying familiar visual tropes, which suited the form’s production methods. Particularly as the century progressed, publishers answered public demand by incorporating strategies of mass production – such as employing different artists to take responsibility for individual stages of the manufacture, like an assembly line – and using cheaper materials that resulted in cruder images.[3] Moreover, following techniques of stage husbandry that were common in full-scale theatre, especially in the first half of the nineteenth century, toy theatre publishers designed scenery that could be recycled in multiple plays to appeal to less affluent junior theatre managers. However, while toy theatre was certainly influenced by its full-scale sibling, Mayhew’s interview with West indicates that there were in fact reciprocal pathways of exchange between London theatreland and toy theatre productions.

West discusses his interactions with theatre personnel in his interview with Mayhew. Keen to emphasize his role in developing the toy, West begins by explaining that his earlier theatrical portraits sold ‘like wildfire among the young folks. […] The success of the theatrical prints was so great, I was obliged to get three presses to print them fast enough. I brought out a new one every day’.[4] To satisfy public demand, West built a network of draftsmen, engravers, and shopkeepers, who helped him to produce and distribute new prints quickly. Theatre staff do not appear to have been involved in West’s production process at first. The prints were inspired by the stage, but they were not designed to represent scenes or actors faithfully: ‘The small ones wasn’t likenesses – they was merely characters to give the costumes. We didn’t make likenesses till very late.’[5] Nevertheless, behind-scenes workers quickly recognized how useful West’s prints were when designing new shows: ‘The wardrobe people at the minor theatres and masquerade people used to buy a great many to make their dresses from.’[6] Martin Meisel long-since explored how theatrical productions engaged in transmedia dialogues in Realizations. West’s remarks support Meisel’s definitive study, as West indicates that patterns of influence circulated between theatres and print shops, rather than being a one-way traffic. Where West allows us to build on Meisel’s findings, however, is what the interview reveals about the first-hand contributions that theatre personnel made to the print selling business, which became toy theatre.

… Mr. Hashley, of the Hamphitheayter, sent Young with a drawing to show me. It was uncommon well done; oh, such a beautiful picture! he got on to be one of the first-rate artists arterwards, and drawed half-crown caricatures; he did all the battle-pieces of them times – all Bonaparte’s battles and Nelson’s shipping. Well I gave him an order directly for the whole of the characters in the Blood Red Knight, wot Hashley was performing at that time. [7]

According to West, Philip Astley – of Astley’s Amphitheatre – widened West’s network of artists and contributors, and prompted him to commission works based on Astley’s productions. If West is to be believed, his remarks indicate that theatre managers networked with members of this adjunct trade, because they recognized the advertising benefits of theatrical prints and toys.

Plotting the location of publishers’ premises in relation to minor playhouses certainly reinforces the proximity of the toy theatre trade to London theatreland. West’s Circulating Library, later known as his Theatrical Print Warehouse, was based in Exeter Street.[8] Exeter Street runs parallel to the Strand, directly behind the Lyceum Theatre. It was close to many minor theatres, as can be seen in maps of London theatreland from the early-nineteenth century. The Surrey and Coburg Theatres – famous for staging the melodramas that were West’s best-sellers – were just across Waterloo Bridge on the other side of the Thames, and Astley’s Amphitheatre was about one mile away by Westminster Bridge. In examining the social and trade networks underpinning toy theatre production on the ground, I am taking cues from Mary Shannon’s investigations in Dickens, Reynolds, and Mayhew on Wellington Street (2015). In the case of toy theatre publishers, plotting locations and networks reinforces and extends our understanding of the cross-media development of popular culture. Yet, for West, dialogues between media forms also accounts for the waning popularity of toy theatres. By the 1870s, this once competitive industry was threatened with obsolescence, but rather than blaming its decline on changing tastes or the rise of imported toys from other countries (as other late-nineteenth century commentators do), West remarks: ‘The decline of the drama is hawful, and it’s just the same with the toy theatres as it is with the real ones.’[9] So, he attributes the unfashionableness of juvenile drama to its full-scale sibling. In fact, the toy’s declining popularity probably had more to do with publishers not updating their material. Toy theatre’s fall from grace coincided with the disintegration of its ties to current productions. Now, the aesthetics of juvenile dramas are commonly used to evoke a bygone time – as in the opening sequence from the BBC’s recent adaptation of Wilkie Collins’s The Moonstone (2016). However, the position of the publishers’ shops and their relationships with theatre personnel shows that in its heyday toy theatre was embedded in up to the minute theatrical culture.

Joanna Hofer-Robinson is a lecturer in nineteenth-century literature at University College Cork. Her recent publications include the monograph, Dickens and Demolition (Edinburgh UP, 2018) and Sensation Drama, 1860—1880: An Anthology (co-edited with Beth Palmer; Edinburgh UP, 2019). In 2015-2016 she was principal investigator for a practice-led research project which staged plays by Charles Dickens and Wilkie Collins.

For more on the above, see Joanna’s full-length article, “‘Kaleidoscopes of Changing Pictures’: Representing Nations in Toy Theatre” in JVC 23.1.