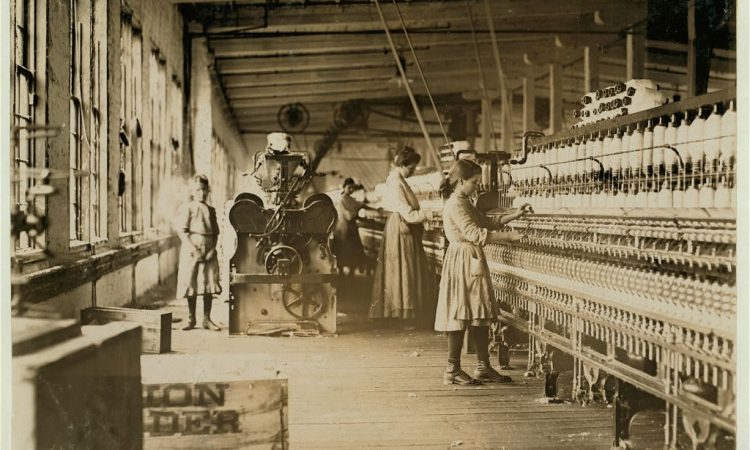 Apart from short journalistic pieces and the material produced for the database [1] associated with the AHRC-funded project, ‘The Poetry of the Lancashire Cotton Famine 1861-65’, my article which appears in Journal of Victorian Culture 25.1 is the first of probably several publications on the literary-historical-cultural subject to which I have devoted the last few years of my research. The article’s title, “This ’Merikay War’: Poetic Responses in Lancashire to the American Civil War’, with its reference to provincial Lancashire dialect and the geopolitics of the time, represents an attempt to encapsulate the confluence of the local and the global which the Lancashire Cotton Famine (also known as the ‘Cotton Panic’, or simply ‘the Distress’) has long presented to historians, and now presents to literary scholars.

The poetry on which the article is based was largely collected from local newspapers in the northwest of England from 2015 onwards, a process which revealed through hundreds of poems [2] that ordinary people had plenty to say about the international, as well as the national and domestic, situation. As several scholars including Brian Maidment, Kirstie Blair and Andrew Hobbs are establishing, newspaper poetry, particularly local newspaper poetry, can be a useful barometer of the breadth and depth of feeling of ordinary people on contemporary subjects. The demand for verse meant that it was often sent speculatively to editors whose desire for copy sometimes outweighed their elitist or qualitative sensibilities. It is also true that some editors recognised the demotic, and indeed democratic, value of publishing the poetry of the public, and developed traditions of inclusive literary cultures within their local areas. Towns such as Dundee in Scotland and Blackburn in northwest England were notable beneficiaries of this effect in the mid-nineteenth century. I was not surprised to find Lancashire poetry which commented on the American Civil War and its economic and social implications for North West England – my background studying Chartist poetry had made me aware of the political sophistication of mid-nineteenth century labouring-class writers – but I was surprised by its magnitude and scope.[3] If the tenor of Lancashire Cotton Famine poetry is to be trusted, and we have few other insights into the thoughts of ordinary people at the time, then Lancastrians’ views certainly ranged from staunch abolitionism to Confederate sympathy, though understandably implicit. But a large amount of poems in between simply yearned for the return of cotton and the end of grinding poverty, regardless of the political consequences for slaves or the fate of the Union. The myth of a near-universal Lancastrian abolitionist nobility, and in particular the idea that Lancashire workers ‘refused to work slave-grown cotton’, had already been exposed by historians,[4] but its persistence is further disrupted by the findings of this project. Manchester, whilst suffering horribly from the effects of famine, was large enough to have a more diverse economy than many of its satellite towns, so its representatives’ famous declaration in support of the Union at the Free Trade Hall in December 1862 should be put in this context. And Lincoln’s equally famous letter[5] in response should be put in the context of a Commander-in-Chief attempting to enlist the support of a vital ally during the bloodiest conflict the planet had ever witnessed. But regional and political bias and lack of rigour have conspired to forget an understandable heterogeneity of opinion, and to disproportionately celebrate elements which appear to confirm a rather romantic moral superiority. Interestingly, during our research we found that newspaper poetry relating to the Lancashire Cotton Famine was proportionately much more prevalent in Lancashire satellite towns (Blackburn, Burnley, Rochdale, Oldham etc.) than in Manchester. Since writing the article, I have come to realise through research into newspaper archives at the New York Public Library, the Connecticut State Library in Hartford, and elsewhere, that this heterogeneity of opinion was being mirrored across the Atlantic. Both Union and Confederate poetic voices variously condemned and celebrated Britain’s neutrality through the war, and characterised the UK government’s stance as either politic or hypocritical. This often depended on the extent to which the speaker thought the chances of the UK swinging either way during the conflict were feasible, and at what point during the war the poem was written. The relatively new speeds of text transmission due to telegraph technology meant that there a very conscious poetic discourse was possible, with some poems in America responding within days to British publications in Punch for example, and verses lifted and republished without attribution in either country. There was an intense awareness on Britain’s reliance on cotton exports on both sides, and of course the 1861 Trent Affair[6] was a major diplomatic flashpoint which intensified political opinion and led to a wealth of satirical poetic commentary on both sides of the Atlantic. As one would expect, poetic commentators used sympathy with starving Lancashire workers to more or less implicitly promulgate their own political viewpoints, but there are also tantalising traces of references to the way that the North American cotton industry suffered during the conflict. I have therefore learned that the designation ‘Lancashire Cotton Famine Poetry’, whilst not exactly a misnomer, should at least be qualified. It is natural that areas surrounding the heavily industrialised southern reaches of the ‘County Palatine’, equally invested in the cotton industry, should produce poetry on ‘the Distress’, so I was prepared to find verse in Cheshire, West Yorkshire, and Derbyshire. But the publicity that the database generated on its publication of the first one hundred poems in the summer of 2018 led to members of the public turning up poetry from Ireland which discussed the Famine, and literature from as far afield as Canada and Australia. Some American poems noted that France, and in particular Normandy, was heavily invested in the cotton industry, and Francophone verse is starting to be unearthed. In addition it is worth speculating that India will produce poetry relating to the subject, given that the Surat region of the western part of the country provided replacement cotton and underwent a corresponding export boom, and that Gujarati poetry was undergoing something of a renaissance at the time. In keeping with the field of Victorian scholarship’s relatively recent recognition through the work of thinkers including Regenia Gagnier[7] of the nature of the processes of transculturation, attention to the bigger picture is being rewarded. What began as a regional project with an international flavour is developing into a global project revealing networks of cultural exchange which enhance our understanding of a historical moment at several different levels. The world’s then bloodiest conflict’s effect on an international commodity, occurring at a time of unprecedented literacy and means of mass communication, has bequeathed to us an unexpectedly broad and deep range of affective commentary.

Dr Simon Rennie is Senior Lecturer in Victorian Poetry at the University of Exeter and has largely researched the field of mid-nineteenth-century labouring-class poetics. As well as various journal articles on that subject, he published the monograph The Poetry of Ernest Jones: Myth, Song, and the ‘Mighty Mind’ (Routledge) in 2015 and is currently maintaining and expanding the AHRC-funded database The Poetry of the Lancashire Cotton Famine 1861-65.

[1] http://cottonfaminepoetry.exeter.ac.uk/ – The database currently features one hundred poems with commentary and audio recitations, but this will increase to several hundred by late spring 2020.

[2] At present, there are something in the region of eight hundred poems collected, but these need to be worked through and digitised. There are still more coming in.

[3] I owe a huge debt of gratitude in this regard to my fellow searcher through the libraries of Lancashire, Dr Ruth Mather.