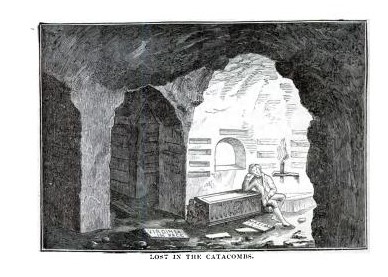 In 1873, American writer and explorer Thomas Wallace Knox published Underground: Or, Life Below the Surface. Weighing in at a hefty 953 pages and drawing on the author’s own personal experience as well as ‘numerous books of travel’, ‘literary gentlemen’, and fictional and scientific sources, it offered an apparently exhaustive examination of every underground space at that point known to mankind: mines, riverbeds, vaults, caves, and many more.[1] Indeed, its subtitle was almost as long as the winding, subterranean labyrinths that were its chief subject matter:

Incidents and accidents beyond the light of day; startling adventures in all parts of the world; mines and the mode of working them; under-currents of society; gambling and its horrors; caverns and their mysteries; the dark ways of wickedness; prisons and their secrets; down in the depths of the sea; strange stories of the detection of crime. [2]

Such a description almost seems more suited to an advertisement for a Victorian circulating library, or the blurb of a mid-nineteenth-century sensation novel. At times, it even reads like a psychoanalytic free association exercise, where mines bring to mind dark under-currents of society, in turn prompting thoughts of gambling, wickedness and prison. The ‘underground’ in question is revealed to be similarly fluid, both subterranean and subaquatic, literal and moral, social and physical.

Knox’s work was well received. An 1873 review in Scientific American remarked that under an ‘attractive title’ Knox had collected ‘much curious information concerning mines, caverns, borings, shafts, tunnels, diving and divers, volcanoes, prisons and dungeons, cellars, sewers, underground railroads, rapid transit and many kindred topics’.[3] This final assertion is particularly interesting. What seems at first glance to be a mere ‘et cetera’ is, I would argue, of great significance in relation to nineteenth-century imaginings of the underground: the many kindred topics to which it could be seamlessly connected.

Knox himself wrote of his epic underground work that ‘in presenting this volume to the public the author would say that it has been his endeavor to make a book in which he could describe the life, not only of the miner, but of all who work under the ground – whether literally or metaphorically’.[4] Knox presents underground spaces (among them Siberian mine shafts, the Paris catacombs and Mammoth Cave) in gripping and sometimes terrifying detail. An entire chapter is dedicated to ‘Explosions in Mines’. He also relates in first-person the horror of realizing one is lost in the catacombs, ‘unnerved, overpowered, and horrified, by a crushing dread of the unknown’.[5]

However, what is arguably more interesting about his lengthy work is the ways in which an exploration of the physical underground is often merely a pretext for more philosophical musings upon character and morality. These are journeys through ethical ‘underworlds’, symbolic excavations that aim to expose the flawed, labyrinthine systems that governed contemporaneous society. It is for this reason that Knox seems equally interested in discoursing upon topics such as ‘Insurance and its Mysteries’, ‘Relations of the Steam Engine to Honesty’ and ‘the Gambling Hells of Germany’ as he does upon underground animal life, diamond mines and the discovery of coal. ‘A great city, in its moral or immoral life, is cut and seamed with subterranean excavations more extensive than those of the richest coalfields of England or Belgium’, he notes:

Wall Street is a mining center greater than the whole of Pennsylvania […] The career of a politician is not unlike that of the miner, though it is frequently much more difficult to follow. The miner may be tracked and found, but there is many a politician whose devious windings would baffle the keenest detective that ever lived. [6]

American politics, he opined in an entire chapter upon the subject, ‘contains a great many elements of a subterranean character’.[7]

David Pike, in his work on the underground, has argued that it is ‘in no way a unified space: not only does it confuse the physical and the metaphorical to a dizzying degree, but even its symbolism is constituted of conflicting and conflicted concepts, images, figures and objects’.[8] The metaphors that attached themselves to the underground in the nineteenth century often prove more interesting than underground spaces themselves (although it is certainly interesting to note that Victorians apparently proved hungry consumers of scientific speleology reports, and enjoyed tours of the Parisian sewers).

The freighting of underground spaces with moral associations is, of course, not a specifically Victorian concept, traceable back through Dante’s Inferno and Greek mythology. However, remarkable in the nineteenth century are the multifaceted ways in which these loaded spaces manifested and proliferated, as technology opened up increasing swathes of the earth and ocean’s underworlds. Jules Verne, in his highly popular Journey to the Centre of the Earth (1864), offered a glimpse into how this possibility might be harnessed for productive fictional output. Therein lies an unexplored avenue of research: the function of subterranean journeys in the genre of popular adventure fiction from the mid- to late-nineteenth century.

Knox, as well as being a journalist and world traveller, also produced a popular series of adventure books for boys during the 1880s and 1890s. Comprising fifteen novels, the Boy Travelers series saw Knox’s youthful protagonists, Fred and Frank, engage in exploits that spanned the globe, from the Far East to Ireland, the Russian Empire to the Levant. Accompanied by maps and plentiful illustrations, Knox’s series also featured underground exploration in several of its novels. In fusing his own enthusiasm for the subterranean with his travelling experience and keen commercial eye for upcoming literary markets, Knox anticipated the flood of boys’ adventure fiction that would appear during the late nineteenth century, in which subterranean journeys played a notable role. Rider Haggard’s King Solomon’s Mines (1885), She (1886) and Allan Quatermain (1887) offer some of the most well-known examples, although Haggard had many imitators and the subterranean journey rapidly became a key trope of adventure fiction from this period.

Such fiction, often categorised as ‘imperial romance’, has been explored at length in relation to questions of masculinity, Victorian imperialism and the feminine ‘other’.[9] What remains to be explored are the ways in which the subterranean journey, often an intense period of heightened emotion and activity, distills the major concerns of these novels. The underground is, in these texts, a symbol of the ‘many kindred topics’ they intended to transmit to their boy readers: namely, how to be a man in a rapidly advancing industrial, imperialist age. In the dark, claustrophobic environment of the underground cave, river or passageway, the pressures that surrounded the Victorian hero – his relationship to women and the domestic, his imperial duty and his moral manliness – are, somewhat paradoxically, brought to light.

Elly McCausland is Senior Lecturer at the University of Oslo, where she teaches British and American Literature. She researches, and has published on, children’s literature, medievalism, Victorian adventure fiction and adaptation. Her first book, Malory’s Magic Book: King Arthur and the Child, 1862-1980, was recently published by Boydell & Brewer, and she is currently working on a project exploring adventure in children’s fiction.

For more on this topic, see Elly’s article, ‘Caverns Measureless to Man: Subterranean Rivers and Adventurous Masculinities in the Victorian Lost World Novel’ in JVC 23.3.