One of my favourite modules to teach is Literature and Psychology, a third-year module which focuses on Victorian literature and reads it in the light of contemporary psychological thought. It is popular with students, though many find it much further removed from their A-level Psychology than they anticipated! The students examine ideas about character formation in nineteenth-century poetry and prose, and place them in the context of philosophical and scientific descriptions of mental development during the period. The connections between nineteenth-century psychology and “pseudo-scientific” discourses such as phrenology and mesmerism also come under scrutiny, along with the close relationship between psychology and Victorian medical discourse. It is not an easy module, but it is one which seems to provide illumination and occasionally even entertainment to both myself and my students. Consequently, I asked final-year undergraduate student, Sophie Clarke, to give me her views on the module, as a student’s perspective can be revealing, and this is her contribution:

“It is no surprise that Literature and Psychology is, and has always been a very popular, but also extremely challenging module. Those who aren’t expert in either discipline would classify ‘psychology’ and ‘literature’ as two mutually exclusive pursuits – the ‘fact’ and the ‘fiction’, quite literally. And yet both are intrinsically linked. Literature is the platform through which reality is elevated, exaggerated and, when a success, revealed. Inevitably, it captures the psychology of humanity, and provides a medium through which it is understood, yet made more incomprehensible. This is a potent mix in the world of academia, and the concentration on Victorian literature in particular bolsters this chemistry further to create a module that allows us, just for a short while, to escape the ‘long intervals of horrible sanity’ (as Poe said).

The module is studied over twelve weeks, and unlike most modules, one novel or collection of short stories is studied intensely over a two week period. I felt this benefited the learning experience substantially, as it allowed more time for students to become acquainted with and really understand each text through its various psychological interpretations. With Serena’s guidance (conducting stimulating and protean discussions that engendered intriguing and incisive questioning of materials and ideas, organised work sheets and articles/extracts) seminar sessions proved to be fruitful and thought-provoking, often developing into extremely helpful and inclusive debates that greatly invigorated the learning experience (especially when students were allowed to play with and examine a model phrenology head!). 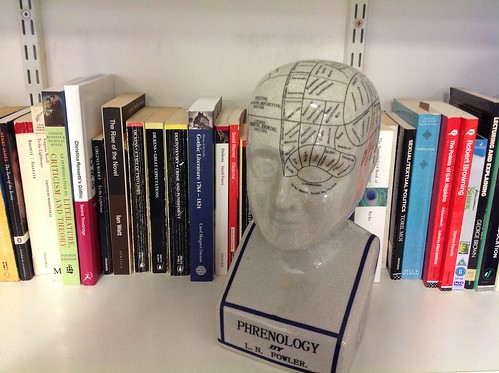 Each week extensively explored a psychological condition, but also queried issues regarding gender, class and politics. The material covered a fairly broad scope, ranging from Poe’s disturbing and macabre tales to the more darkly obscure of Charlotte Bronte’s novels, Villette. In this module more than any other, I felt that students had a great opportunity to explore character dynamics thoroughly, and had scope to develop original ideas, whilst maintaining a strong focus on contemporary theoretical material.

As expected, the module demanded engagement with various theories postulated by nineteenth-century psychoanalysts, physicians and the odd fabulist! The intriguing and sometimes idiosyncratic theories of Jean-Etienne Esquirol, George Man Burrows, and of course, Sigmund Freud were all covered in entertaining and illuminating fashion. It was fascinating to step away from modern psychological thought, and experience the enigmatic, and oft-times bizarre world of Victorian psychology directly through contemporary sources (most of which would have been near impossible to find if they hadn’t been provided by Serena). It was important to directly address these primary schools of thought, not only to discover the foundations upon which modern psychology is built, but also to appreciate the complexities of Victorian literature that a contemporary perspective deficient of such historical knowledge would be incapable of thoroughly comprehending.

The module commences with the works of Edgar Allan Poe, a perfect introductory choice due to the plethora of psychological conditions that are covered in his tales –  monomania, insanity and depression are just a selection of maladies that receive a beautifully idiosyncratic portrayal (all of which could be discussed further in ensuing essays). Poe is an obvious choice for such topics; having been afflicted with depression and other mental grievances throughout his life, few writers can so brilliantly harness their innate literary gifts to the poetic description of extraordinary states of mind.  The translation of personal involvement to the fictional tale is a fascinating facet shared by Poe’s co-authors on the module including Fyodor Dostoevksy, and most notably the two female authors, Charlotte Bronte and Charlotte Perkins Gilman, whose work particularly echoes the isolation suffered by women, and its effects on the mental state.

How then, does the personal context affect a piece of writing? Though biographical material is always of secondary importance to the literary piece, I felt that without that spark of personal trauma, most of the works on this module would never have been created, or would have at least lacked an inherent truth – could Dostoevksy have really created such an enigmatic character in Raskolnikov had he himself not experienced mental exhaustion and epilepsy? Though Poe’s work is often embellished to the point of deviance, most Victorian texts (or at least those examples presented on the module) with a psychological underpinning do not negate the seriousness of psychoanalysis, but endow it with a renewed sensitivity and understanding, and promote issues that were not normally highlighted in the nineteenth century. Perkins Gilman’s ‘The Yellow Wallpaper’ is a perfect example of this; at the core of the text, beyond all other interpretations, is the urgent protest against a patriarchal regime and ignorance regarding female mental health – the text may (and should be, in my opinion) be read as a response to Weir Mitchell’s ‘Rest-Cure’ method (which proved to be more tortuous than restorative), and more broadly as an early revolutionary feminist piece. The integration of personal psychological trauma and the endless possibilities of the fictionalised form act as a progressive movement in a wider social context.

As with all great works of literature, a successful combination of intellectual stimulation and entertaining story-telling renders the most compelling and intriguing engagement with a text. This module lacks for neither component, and the psychological dimension of the study grants a fascinating but also sometimes humorous look at the historical progression of psychiatry. Epilepsy was long thought to have been a curse from the gods, the prescribed cure for which was to convince the sufferer never to place one foot on top of the other. Building upon Christian scripture, some psychologists believed insanity was also a curse from God for disobedience, along with the scab and haemorrhoids; so perhaps there was a rather more mundane explanation for Raskolnikov’s frequent displays of mental anguish!

The prior is just an example of ideas and questions raised by myself (and I’m sure the other students) during the course of the module. Unlike many academic subjects that constrain students with rigid, jargon-heavy assessment and formulaic questions, the ‘Literature and Psychology’ module promulgated a multi-faceted examination of the texts by allowing students to simply pick a psychological topic (such as mesmerism, or hysteria) and use it to assess critically the most favoured or applicable text.  The word count was rather restrictive for such a broad set of topics (though I appreciate there has to be a limit set somewhere); however, the subjects covered were extremely enjoyable to investigate and deconstruct and allowed for room effectively to develop an original discussion. In my opinion, encouragement and a skeleton outline of the field are conducive to learning, but a student will only flourish if inspired by their tutor, and if given the opportunity to independently explore the complexities of the subject and the intricacies of a topic. Serena deserves immense recognition in achieving this balance – not only was the module excellently organised, but information was conveyed with panache and verve.”

Serena Trowbridge is Lecturer in English Literature at Birmingham City University. Research interests include Victorian poetry and novels; nineteenth century cultures of faith; Pre-Raphaelitism and Gothic. She blogs at Culture and Anarchy and tweets @serena_t.