Entering its final month, the J. Paul Getty Center’s exhibit Felice Beato: A Photographer on the Eastern Road offers a rich retrospective of an important Victorian photographer and provides an evocative lens for viewing the global nineteenth century.   Collecting images of Japan, China, India, Korea, and Burma and photos of some of the most important conflicts of the age, including the Crimean War, the Indian Mutiny and the Second Opium War, Beato and his work grant a fascinating glimpse into how the “East” was imagined and understood by the Victorians.

Born in 1832 in Italy, Beato died in the same country in 1909—but his lifetime travels had him traverse a far vaster expanse of the globe than those details would suggest.  In photographing both the Near and Far East, Beato’s photographic gaze touched nearly as many soils of the British Empire as did the sun within those same decades.  Growing up in Constantinople, Beato partnered with his brother-in-law, James Robertson, a Scot, and eventually became famous for both his photographs of the far-flung places of the “exotic Orient” and for his recording of the brutal casualties of war.  Indeed, he and Robertson share the distinction of being among the first photographers to shoot in the Holy Land, as well as the first to show human corpses on the battlefield.

While there have been smaller exhibitions of Beato’s work in other museums, the acquisition of 800 photographs by the Getty in 2007 makes this exhibit a unique opportunity to experience the immense scope of his oeuvre.  Curated by Anne Lacoste, the exhibit presents a study in the stark contrasts that his work presents.  Beato was extremely fond of shooting the architecture of the places he visited, and was an astute documentarian of landscape.  As such, many of his photos have the quality of postcards, relishing in a picturesque beauty that would have certainly catered to the sentimental tastes of the British audiences for whom the images were shot.  Having set up a studio in Yokohama from 1863 to 1877, Beato recorded an array of images of people in pre-industrial Japan, showcasing modes of dress and daily life from a variety of social positions and classes.  Handcolored to evocative effect, these images hearken back to European portrait paintings from the eighteenth and nineteenth centuries, in the way that their subjects exhibit a certain presence and gravitas, while also possessing the quality of early anthropological documents, in the way that they aestheticize the “exotic other.”  Against these carefully and beautifully rendered images are his frank and unflinching photos of war and its aftermath.  And though Beato has come under some more recent critique, upon revelations that he likely staged and arranged the corpses in his photos, their naturalism (however constructed) makes them powerful nonetheless—especially in the way they presage the “modern” war photography of the twentieth century and in juxtaposition with his other work. Perhaps most striking in this regard is moving from his lovely pictures of the Taj Mahal and the Golden Temple at Amritsar to the disturbing images of Lucknow following its siege during the Indian Mutiny.  To see skulls and rib cages next to shimmering reflections in ponds within the same exhibit and by the same photographer is a startling experience.  For scholars interested in the Victorian period, it offers a clear and provocative glimpse into the complexities of the era and of the often-contradictory ways that the project of empire was constructed and, indeed, consumed. 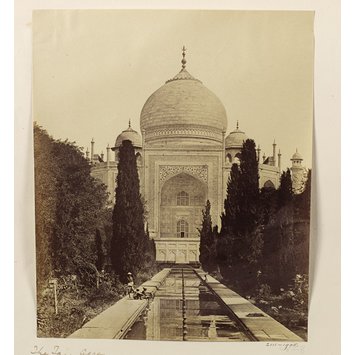 For those who are unable to attend the exhibition, the Getty Center has published a fine book companion under the same name that is widely available.  The plates are extensive and large and, as one would expect of the Getty, of the highest quality.  Most of the book’s written content is by Anne Lacoste and offers a fine survey of Beato’s life, his audience and his aesthetic styles.  It also includes an essay by Fred Ritchin, who situates Beato in the tradition of war photography.  It is also a useful resource for both the lay and scholarly reader, as it contains tools such as a chronology of key biographical and historical events for general background and a bibliography for further research.

Felice Beato: A Photographer of the Eastern Road will close on April 24, 2011—along with its companion exhibit, Photography from New China, a fascinating and, at times, dazzling display of photographs by young artists working in present-day China.  Information about the Getty Center location and hours can be found at: www.getty.edu In 2012, the Beato exhibit will travel to the Tokyo Museum of Metropolitan Photography, and be on display from March 6 to May 6.